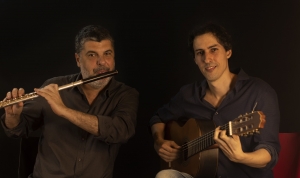 The seventh edition of this unique festival in Europe will again take place in the culturally rich Delfshaven district in Rotterdam!

This edition is all about choro music and the crossovers with jazz and classical. This year 2 days!

More info about the artists below

* Food by Bom sabor do Brasil

From 15:00 Brazilian snacks (not included in the ticket price)

From 17:30 Brazilian Dinner (not included in the ticket price)

Do not forget to reserve your dinner. Check out the menu and book your dinner here. Email: contact@bomsabordobrasil.nl.

Classical meets choro with Elizabeth Fadel and others

Every year a great experience! Don’t miss it!!

What is Choro? Check our video:

* Food by Bom sabor do Brasil

From 15:00 Brazilian snacks (not included in the ticket price)

From 17:30 Brazilian Dinner (not included in the ticket price)

Do not forget to reserve your dinner. Check out the menu and book your dinner here. Email: contact@bomsabordobrasil.nl.

Kids up to 12 years free

Eduardo Neves (Flute and Tenor Sax) and Caio Marcio Santos (Nylon Guitar) present a duo concert of Brazilian Music. The duo gather ancient Brazilian styles such as Choro (Rio de Janeiro´s style from 19th century) and Bossa Nova (Rio de Janeiro´s style from 1960´s) with their own musical compositions, offering the public an opportunity to have a rich overview from the diverse sounds and musical approaches from Brazil. The interchange between old and new is the current trend in Brazil, from the virtuosic approach of Choro ancient music to Jazz improvisations concepts applied to Bossa Nova, both musicians have large experience to convey subtle Brazilian musical accents.

Eduardo Neves is an established musician in Brazil´s artistic scenario, known both as a skilled player and as arranger. Edu has been very active, working for many great artists of Brazil, such as Elza Soares, Roberta Sá, Hamilton de Holanda and Zeca Pagodinho. Further than that, Edu has a solid work as bandleader, with many albums released introducing his own compositions and arrangements.

Caio Marcio Santos has graduated in classical guitar and classical composition and has a master degree in performance at a Federal University in Rio de Janeiro (Uni Rio). Caio has been very active on Brazilian scene and also abroad, playing with many artists such as Rio Jazz 4 (Danish group with Christina Von Bullow and Morten Ankarfeldt, a duo with the Canadian guitar player Carlos Jimenez from Montréal), Tira Poeira group, Ney Matogrosso and Maria Bethânia, as well as scoring for film music (ex: Before I Forget – Fox Films International).

Since 2000 Pedro Aragão has been working as a mandolin player, making recordings and performing with Brazilian singers and musicians including Roberto Silva, Cristina Buarque, Zélia Duncan, Mônica Salmaso, Nailor Proveta and Mauricio Carrilho, among others.

As a choro musician, he has played in many different countries such as Portugal, Spain, France, Belgium, Sweden, Denmark, Spain, Colombia and Peru. His activities as a professional mandolin player also include three ensembles: Terno Carioca (choro ensemble that recorded a CD in 2007 based on the work of Claudionor Cruz (an important Brazilian guitar player in the period from 1940-1960); Los Cuatro (ensemble specializing in Latin American music, with musical direction by Sergio Valdeos, Peruvian guitar player); and Bandolinata (mandolin quartet ensemble).

He is also director of Instituto Jacob do Bandolim, responsible for the publication of two books devoted to the master of mandolin in Brazil: Tocando com Jacob and Album de Composições de Jacob do Bandolim.

Pedro worked from 2005 till 2015 as a coordinator at Escola portátil de música in Rio de Janeiro.